Jeremy Renner gave the best performance of his career in the recently released Wind River. I’m not going to guarantee that he will be one of the five nominees for best actor come Oscar season, but he’ll definitely deserve a look. Renner has had a strong career with some hits and misses. None of the misses were his fault, because he always brings it. He’s earned two Oscar nominations for The Hurt Locker (best actor) and The Town (best supporting actor). So how was he able to once again blow me away with his performance? He didn’t have a powerful monologue; he didn’t scream while saliva shot out of his mouth and mucus ran down his face; he didn’t perfectly execute a portrayal of a famous or infamous person in history. No, it was much more subtle.

Renner captured the art of subtle acting perfectly. Instead of a showy, loud performance, Renner stays within the reality of the character. He’s quiet, yet his face shows everything you need to know. He has a job that requires him to be out in the cold, he has an everlasting emotional pain from something that has happened in the past and he had some sort of falling out with his wife. You could figure all of this out through limited dialogue and facial expressions. Showing without being showy or taking the time to explain all of that through exposition improves the film because it respects the audience’s intelligence. We can figure it out or we could wait to find out the details later in the film. It keeps us engaged.

Subtle acting also makes scenes more realistic. Not that it never happens in real life, but people ordinarily don’t scream at each other and flip tables to show their anger. They hold in that rage. That’s what Renner is able to accomplish in Wind River. Like I said earlier, there is a pain on his face that serves as an emotional wall. Every now and then throughout the movie, he runs into unexpected situations or he talks about devastating events of his past where tears seep through. He’ll quickly hide them and put that wall back up as a defense mechanism to keep going in life. I think that is real and it’s definitely relatable. All of us have things in everyday life that we have to endure.

Behind the strength of a strong ensemble cast, Spotlight captured best picture at the 2016 Oscars.

One of my favorite movies of 2015, the best movie of that year voted by the Academy, and a movie that I often like to throw on in the background is Spotlight. I love the movie because it’s so real. Everyone acts subtly and like a human being. I work in a newsroom so Spotlight holds a special place in my heart for perfectly portraying the job and what happens in the workplace. They accomplish this by capturing different personalities and grounding them in reality. In a movie that deals with the true story of priests molesting children, a film could easily devolve into screaming and monologging for the sake of invoking emotion. But Spotlight took a composed approach. It told the story through the reporters. They were regular people. When things didn’t go their way, they didn’t yell or knock over a water cooler. They were simply disappointed and moved on. That way when the actors do raise their voices, it means something. It allowed audiences to connect with the film. Also, like I said about Renner, you knew the characters without having them come out and tell you who they are. You learn traits through their acting and you connect without even realizing it. 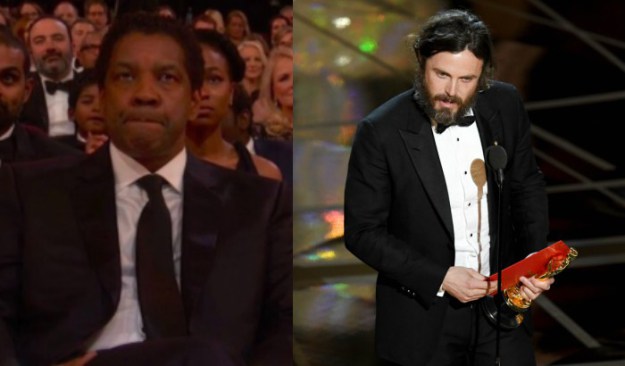 Denzel Washington, left, and Casey Affleck faced off in the best actor category at the 2017 Academy Awards.

A subtle acting performance and more of a showy acting performance went head-to-head during the 2017 Oscars in the best actor category. In the subtle performance, Casey Affleck shined in the best picture nominated Manchester By the Sea, while Denzel Washington acted his tail off in another best picture nominee, Fences. Both performances were so great all the other nominees didn’t have a shot. With polar opposite roles, how did the Academy decide a winner? With my Oscar picks, I thought the Academy would go with Denzel because of the clout he had built, earning seven acting Oscar nominations and winning two in his career (Glory, Training Day), while Affleck was coming into only his second nomination. The Academy went with Affleck and I agreed with the decision. Affleck is able to capture depression perfectly through subtlety. Another in-your-face Denzel performance that we have seen before just doesn’t match up to Affleck’s realistic dive into depression. Does that mean Affleck would have been robbed if Denzel added a third golden statute to his trophy case? No. It’s really subjective.

Denzel Washington won an Oscar for his leading role in Training Day.

Is subtle acting better than showy, in-your-face acting? No. It’s just different. It depends on the movie and the route the director wants to take. Once the decision is made, he or she better have the correct acting talent because that could make or break a film. As great as Denzel Washington is, he is not subtle. As much as I have enjoyed Casey Affleck’s career, he can’t handle a movie like Fences that requires a powerful voice and a demanding presence. Some of my favorite movie moments, such as Andrew Garfield’s freak out in The Social Network or Denzel Washington in Training Day, are showy and loud. And those movies are great. But sometimes a movie calls for more of a composed effort to capture the realism of a character or drive the story forward without stopping to explain things an actor can’t show with just his face. Jeremy Renner planted himself among the actors who could handle that responsibility.

Catch my review of Wind River on today’s (Aug. 30) episode of The Bridge during the segment “Five Minutes in the Film Room.”

1 Response to Something subtle