The best and worst of the summer

Wonder Woman made the most money at the domestic box this summer, but where does it rank among the best movies of the four-month season?

Usually I see more films during the summer, but this season I only got to the theater 11 times (12 if you count seeing Dunkirk twice). This year I more so sat back waiting for word of mouth and critic reviews to weed out most of the crap. I’ve gotta say, I had a pleasant experience this summer, much better than the past two years. Although the blockbusters stretch into March now, even February, the official summer movie season runs from May through August so you won’t see Fate of the Furious in here. Also, if a movie does not appear on this list that had a wide release from May through August, it means I haven’t seen it yet. Not that I don’t want to see it, I just haven’t gotten there. Let’s rank the films of the summer that I’ve seen starting with the worst.

Trust me. There’s not more than meets the eye. This is the worst Transformers movie, and that’s saying something. There hasn’t been a good Transformers since the first one in 2007. Now, I say it’s the worst, but it truly depends how you judge them. It’s a catch-22. You may think Transformers: Revenge of the Fallen is the worst because it is the most offensive. You may think Transformers: Age of Extinction is the worst because it seems as though Michael Bay cared more about product placement than making a good movie. I agree that they’ve all been bad except for the first one, but Revenge of the Fallen and Age of Extinction are guilty pleasures. They at least have elements of fun. The Last Knight was just dull. I think it tried to be a better movie, but it just turned out lazy instead. And it was 2 HOURS AND 29 MINUTES! As someone who usually gives this films a pass for being dumb fun, I think I’ve reached the end of the line with this franchise. It’s easily the worst movie I saw this summer. And is definitely a contender for worst movie of the summer. 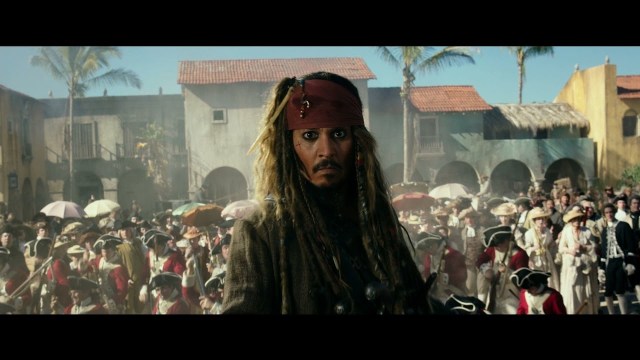 10. Pirates of the Caribbean: Dead Men Tell No Tales

Another fifth movie in a franchise, Pirates of the Caribbean: Dead Men Tell No Tales was much better than its predecessor, but doesn’t quite match the quality of the original trilogy. I enjoy the first (Curse of the Black Pearl) and third (At World’s End) movies most in the franchise, and Dead Men Tell No Tales tries to get back on that level with more of a fun Captain Jack Sparrow. You can say whatever you want about Johnny Depp, but you can’t deny how good he is in the role. Also, Javier Bardem is a fun villain and Hans Zimmer’s Pirates of the Caribbean score is one of my favorites ever. I don’t like how they handle the female lead, but ultimately I had a good time. However, I’m a fan of the franchise. If you don’t like the franchise, this fifth installment won’t change your mind.

What I thought might be one of my favorite movies of the summer turned out to be … fine. Guardians of the Galaxy Vol. 2 recaptured a lot of the humor of the first installment, but had some serious tonal issues. A scene would start with a dramatic moment and then end with an out-of-place joke. Nothing really happens. The reveal of Star Lord’s father is uninteresting, Star Lord and Rocket’s feud is forced and emotional moments don’t quite hold the weight they did in the first movie. That being said, I laughed a lot, I still enjoy the characters I fell in love with in the first movie and I really like what they did with the action. One last quibble though, there are FIVE after-credit scenes. FIVE. Marvel, please stop making us wait 10 more minutes after a two-hour plus film.

I loved Charlize Theron, James McAvoy and the action in Atomic Blonde. It’s enough to carry the entire movie through a poor and convoluted plot that leaves your head spinning. And when you think it’s over, the movie keeps going, giving you another ending that you never asked for and makes the movie worse. Now, that’s a little harsh, but with a solid plot, this would be great. I will most definitely re-watch this in the future for its incredible long-take action sequences and immaculate one-take stairwell fight scene. You could see the effort Theron put into the fight choreography and it pays off. If only the rest of the movie caught up with the excellence of the action. 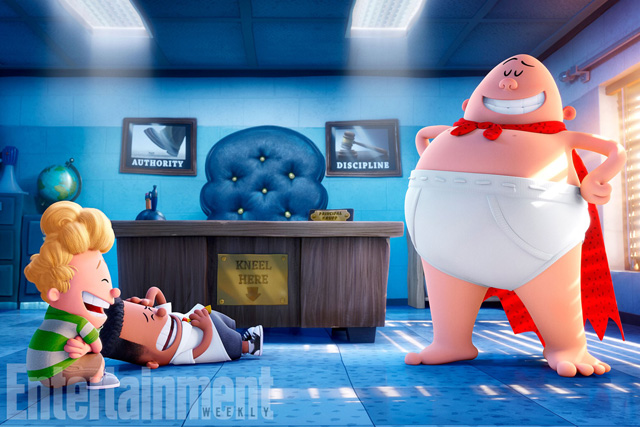 I saw this movie with my mom out of nostalgia because I used to read the books as a kid. I didn’t expect much from it, but the movie surprised me. Captain Underpants is a funny and solid kids movie that is faithful to the source material and has a great message. It’s easily Kevin Hart’s best movie, in which he voices George. Thomas Middleditch also does a great job as his best friend Harold, while Ed Helms voices Captain Underpants/Mr. Krupp. Also, the animation really fit the movie. I had a lot of fun with it and was happy to see the property handled correctly.

After the disappointing Batman v. Superman: Dawn of Justice and the disastrous Suicide Squad, Wonder Woman took the summer by storm and put the DCEU back on the map. Gal Gadot does a nice job as Wonder Woman and her chemistry with Chris Pine is great. Although the movie had a greater affect on women, Wonder Woman does not just exist to empower females. It’s a great movie that balanced men and women working together and learning from each other. I also love the score (specifically Wonder Woman’s Wrath), the iconic moments (Wonder Woman walking across no man’s land) and the emotion in the film. I only have problems with the villains. They were generic, and I don’t think how they handled Ares worked.

Tom Holland knocks the role of Peter Parker and Spider-Man out of the park. He is the best actor in the role we’ve ever had and I like Tobey Maguire and Andrew Garfield. That didn’t surprise me because we had seen his acting chops in Captain America: Civil War. What did shock me was how much attention they put on the other characters and the acting talent they built with Robert Downey Jr., Michael Keaton, John Batalon, Donald Glover, Hannibal Buress and Zendaya. Keaton is amazing as the villain, the Vulture. The way he plays the Vulture and the way he is written as a real villain instead a mustache-twirling bad guy makes the movie so great and gives the Marvel Cinematic Universe one of its best villains. I had a lot of fun and I can’t wait to see what’s next for the web crawler now that the franchise is stabilized. 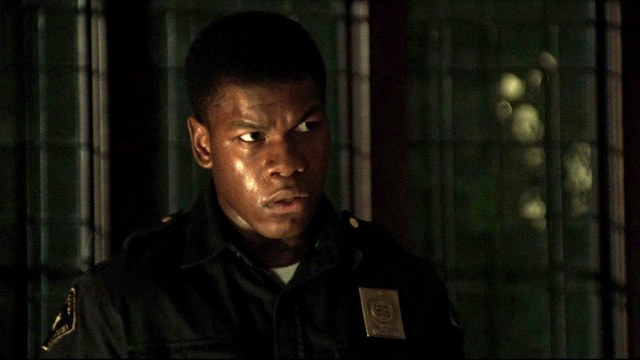 Kathryn Bigelow is one of my favorite directors working today with her amazing films The Hurt Locker and Zero Dark Thirty. Detroit is another movie that shows you why she’s so great. She puts the camera right in the faces of the actors to provide an intimate and claustrophobic feel, while showing the fear, pain and dread experienced during a horrible situation. The movie respects those involved in the real-life situation and doesn’t paint a picture that white people are bad and black people are good. There are righteous people and there are evil people. There are also those who are good people, but they do nothing to help the cause. They just ignore it. There’s a balance, and that’s why the film works. Also, Algee Smith had a breakout performance as the lead singer of The Dramatics. Bigelow needs to do a movie more than once every four years, because she brings films to another level. 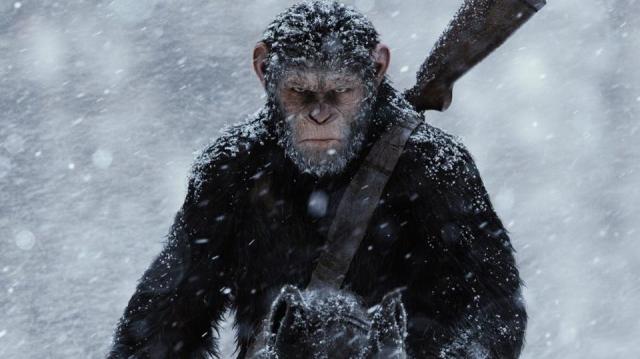 3. War for the Planet of the Apes

I love all of these movies, and War for the Planet of the Apes is a fitting end to a great trilogy. I was shocked when Rise of the Planet of the Apes was good, and Dawn of the Planet of the Apes is even better. War for the Planet of the Apes falls just behind Dawn but above Rise if I were to rank them. Why this most recent installment is so good is very similar to why the others blow me away. Andy Serkis is obviously the gold standard when it comes to motion capture and the special effects are phenomenal. There’s great emotion, chilling shots and great acting. While there are similarities, each film in the franchise is its own movie. War is no different. It incorporates the new element of apes working alongside humans against Caesar’s army. The movie is great, and the franchise is still fresh, but I hope they quit while they’re ahead. It was a good wrap-up. Let’s leave it at that. 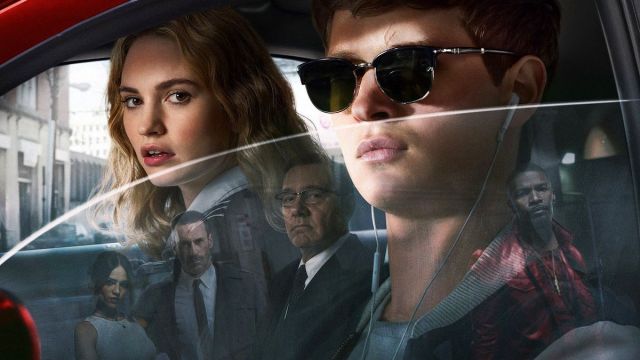 I saw the trailer for this movie and I thought it looked stupid. But then at the end of the trailer it said “directed by Edgar Wright” and I was immediately on board. I’m not the biggest Edgar Wright aficionado, but Scott Pilgrim vs. the World is one of my favorite comedies of all time. At the very least, you know you’re going to get a unique film with Wright, and that’s exactly what Baby Driver provides. The one-takes, the driving, the music, I mean this movie is a thrill ride from start to finish. It even has the most exciting walking for coffee scene in the history of walking for coffee scenes. Baby Driver doesn’t just play the music over the scenes. It matches up with what is happening in the scenes. For instance, whenever a gun fires, it’s to the beat of the song. It’s a great cast led by the surprisingly good Ansel Elgort and supported by Lily James, Kevin Spacey, Jamie Foxx and Jon Hamm. Baby Driver is fresh and new in a world where not much is original anymore. 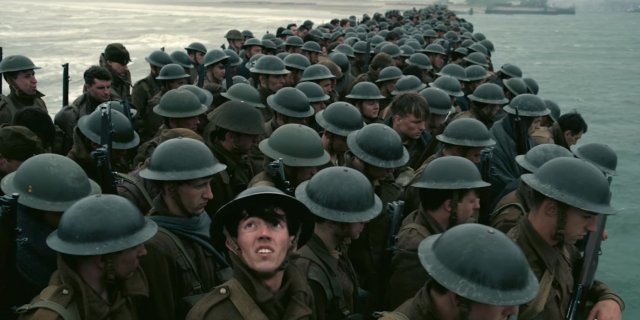 Christopher Nolan is my favorite director, and World War II has been one of the most popular wars to put on the big screen. When I heard Nolan was taking on World War II, I couldn’t wait for the release and he didn’t disappoint. He gives you a war movie that you have never seen before. Nolan drops you right into Dunkirk, France, and doesn’t remove you from the battle until the 1 hour, 47 minutes the movie lasts. The acting is great (with the highlights being Tom Hardy, Fionn Whitehead and Mark Rylance), the storytelling is clever and the visuals are phenomenal. The intensity of the scenes left me on the edge of my seat willing the characters to get off the beach and cheering when the evacuation succeeded. I also really enjoy that Nolan respects the intelligence of the audience by not telling you everything through exposition and the veterans who were effected by the battle. Dunkirk is even better the second time around as you can pick up things that you missed because of the knowledge you gained in the first viewing. It’s in the upper echelon of the greatest war movies of all time and tops the list of the 2017 Summer movie season.

Catch my review of Spider-Man: Homecoming on today’s (Aug. 23) episode of The Bridge during the segment “Five Minutes in the Film Room.”

1 Response to The best and worst of the summer