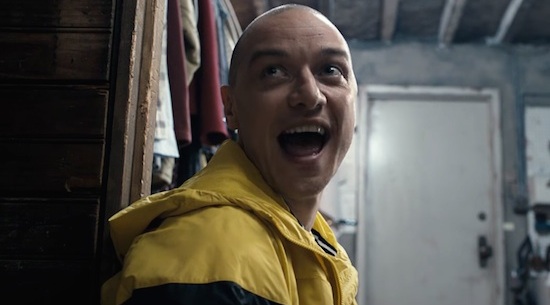 When I first saw the trailer for Split, I laughed … I laughed. I mean James McAvoy was dressed as a woman. And then pretending to be a nine-year-old boy. When I thought it couldn’t get  worse, what popped on the screen? “From writer/director M. Night Shyamalan.” This movie had to be a joke. It looked terrible. Also, it was coming out in January where bad movies go to die. It was a cinch. Another Shyamalan disaster. Then an early review came out from one of my most respected YouTubers, Chris Stuckmann. He gave the movie an A- … Huh? … What? … How?

That didn’t completely sell me because Shyamalan inspired Stuckmann with his movies earlier in his career so maybe he pumped the grade up a bit. But other positive reviews came out closer to the release date. Rotten Tomatoes had it 74% (as of Jan. 29) and it made a strong $40 million in its opening weekend. Conclusion, I guess I better see this movie. Listening to the Schmoes Know Live Show, which I listen to once a week, they started discussing the movie and skirting the line of spoilers. Conclusion, I need to see this movie NOW before it gets spoiled. So I find the next showing, which is at 10:30 p.m. at Regal in Dickson City, and floor it. I buy the ticket, grab a box of Buncha Crunch and head to Theater 8. Let me tell you … this movie’s good. No … it’s great.

Before getting into the movie, let’s talk Shyamalan’s filmography. First, I’ve never seen The Sixth Sense so Unbreakable is my favorite of his films. A superhero movie that was truly ahead of its time. Although Signs and even The Village have a following, I don’t fall in that group. Everything after, including Lady in the Water, The Happening, The Last Airbender and After Earth, was terrible (The Happening is kind of funny though in that so bad it’s good way). The Visit apparently was a bit of a return to form for Shyamalan, although my friend Jeremy says it’s awful. I never saw it so I can’t judge. But of all I’ve seen Unbreakable is easily the favorite. In fact, it’s the only movie I like of his. Until Split.

First and foremost, this movie doesn’t work without James McAvoy. It is a well-written movie. It is a well-directed movie. But if you don’t get the actor capable of portraying so many different personalities without it just seeming ridiculous, you don’t have a movie. McAvoy is one of the most underrated actors of our time and it’s amazing to watch him shine. The female lead, Anya Taylor-Joy (aka Casey), is also excellent, but this is McAvoy’s movie. The way he smoothly transitioned his facial expressions and body language as he moved from personality to personality was absolutely on point and haunting. He only goes through about seven or eight personalities, not the 24 that he supposedly has, but seven or eight is still remarkably impressive.

The story is strong. I’m happy the first scene in the trailer (the girls getting kidnapped) is essentially the first scene in the movie. It jumps right into the action and builds the characters from their, Taylor-Joy’s through flashbacks and McAvoy’s through his time visiting his therapist. On a side note, the opening credits separate into 24 little boxes before coming into one. I thought that was clever.

Although I don’t care for his movies, Shyamalan has an unfortunate expectation put on him. Since The Sixth Sense, fans expect all his movies to have some sort of twist. It’s unfair. I have to give him that. But I can’t say I’m not one of those people who feels that way. So I’m thinking what will be the twist in Split? That’s going to make or break the film for me. He handles this stigma to perfection.

The movie plays out exactly how he tells you, since the trailer, it will go. The 24th personality is a beast and it’s coming for these three kidnapped girls. That’s what happens. McAvoy, as the beast, kills two of the girls to leave a showdown between him and our main character, Taylor-Joy.

A little background, Taylor-Joy’s character went through some horrible things as a child. She was sexually abused by her uncle who became her legal guardian after her father died. She had a moment early in childhood where she grabbed a shotgun and had a chance to kill him and couldn’t pull the trigger. Now, facing the beast, she is left with a shotgun to fight him off. A little on the nose? Sure. But everything was set up so beautifully that it didn’t matter. Shyamalan was back in his comfort zone. He didn’t tell you right away that this happened, but threw in things earlier in the film to clue you in. For example, when McAvoy goes to possibly rape one of the girls, Taylor-Joy tells her to pee on herself. Originally you think, ‘how does she know this?’ Then we realize she has experienced it. That’s good writing, and it leaves the movie to only benefit from a second viewing.

Getting back to the showdown, Taylor-Joy has the courage to pull the trigger (multiple times), but McAvoy is too strong. McAvoy is about to kill Taylor-Joy, but sees her scars that she has accumulated throughout her life of abuse and realizes they had a similar past. He lets her go, and rejoices in the fact that she is broken. A maintenance worker at the zoo, where she was being held all along, finds her. She is safe from the beast. However, a cop comes to ask her if she wants to go back to her uncle and she just stares, which sort of confuses and startles the cop. I love that Shyamalan didn’t resort to his exposition that got him into trouble in the past. Show, don’t tell. The facial expressions say it all. She doesn’t want to go back to him, and she’s ready to stand up for herself. She overcame that fear when she used the shotgun against McAvoy.

It then cuts to McAvoy, who got away, talking among his personalities, and they are pleased at how powerful the beast has made him and they plan on doing the same thing to other people. Movie over.

Quick analysis, good movie. Some things don’t fit into place. There is no twist and I respect him for that…

The movie isn’t over, and it’s about to become great.

After the movie flashes its title on the screen to signify the end of the movie and the beginning of the credits, it cuts to a scene in a diner where there is a newscast of the kidnapping and deaths of the two girls. They give McAvoy a name “The Hoard,” which I originally thought was stupid.

But then this happened.

Women are talking at the counter and they say something along the lines of, “Didn’t they give that guy in the wheelchair who went to prison a name like that too? What was it?” Bruce Willis as David Dunn peeks his head out and says…

Split is a movie within the Unbreakable universe 17 years after the original film. Split is a super villain origin story.

I had never seen a movie wait to reveal itself as a sequel until the end of the film. It was unbelievably shocking. Shyamalan’s patience to reveal the twist worked to perfection. And it’s not a twist that makes no sense and pops up out of nowhere. It is set up. McAvoy’s character is broken. That theme builds throughout the movie as he sorts through his personalities to find the one that can protect him and piece him back together.

Samuel L. Jackson’s character in Unbreakable, Mr. Glass, is also broken and he proves to be the villain of that film. Unbreakable also establishes every superhero is the opposite of the villain. Hence, Bruce Willis as David Dunn is unbreakable. So it’s all set up. It all makes sense.

Also, Split doesn’t work without the twist. McAvoy is a beast? C’mon. But McAvoy as a beast in a superhero universe? Much more plausible.

Kudos to Shyamalan for not selling this movie as Unbreakable 2 or a movie within the Unbreakable universe. He focused on making a good movie instead of throwing in a property to get audiences to flock to the theater like 10 Cloverfield Lane. Could you imagine how cool it would have been if 10 Cloverfield Lane changed its title? You would have the equivalent of Split’s shock value.

Now, Unbreakable wasn’t a blockbuster. I had a group of people in front of me say, “What does that mean?” during the reveal. Not sure how this film hit those moviegoers. But I hope you’ve seen Unbreakable. It’s make the movie that much better, and I can’t wait to see it again.

What does this mean for Taylor-Joy’s character in Split? Will she turn into a villain as well? What has Willis’ character been doing over the past 17 years? We’ll have to wait for Split 2 or Unbreakable 2. Or, honestly, this could stand alone. We don’t need more. But we do want more from Shyamalan. Who knew?