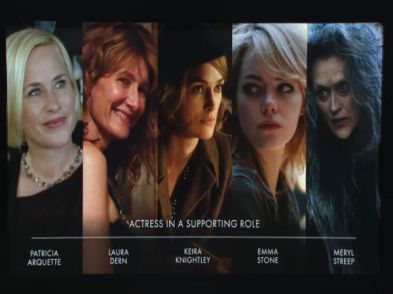 Let me just say quickly that these Oscar posts are my choices for who should win. The Academy may choose differently, but these will all be my opinions. I meant to say that before my Best Supporting Actor post…oops. Well now you know, and let’s get to it.

Arquette was phenomenal. She really was a believable mother throughout. If I didn’t know any better, I could have believed they were actually her kids. She truly cared for them.

I’m so happy Dern got a nomination. She had great heart in the film, and she really added to the depth of the trials and tribulations of Reese Witherspoon’s character by playing her mother. I’ll talk about Reese when I get to the best actress category.

I didn’t know she could act, but Knightley proved it here. She put together a powerful performance that was key to the film, alongside Benedict Cumberbatch.

I always knew she could act, but if there were any doubters out there before “Birdman” this proved them wrong. I’m excited to see Stone in movies for years.

Meryl Streep (Into the Woods)

Of course she got nominated…This is the only actress whose movie I didn’t see, but c’mon. She gets nominated every year just because she’s Meryl Streep. I would have given Jessica Chastain a nomination for her role in “A Most Violent Year” instead, but the Oscars would apparently be lost with Meryl.

I don’t want it to seem like I’m bashing Streep. She is possibly the greatest actress who ever lived, but I don’t think she should be nominated simply because of her name. Sorry Meryl…you’re out.

Stone killed it in “Birdman,” but again that film succeeded based on the strength of its entire cast, not just one actor or actress. Even Kobe needed Shaq, and “Birdman” had seven Shaqs. Sorry Emma…you’re out.

Dern was a pleasant surprise in “Wild” as I had only expected Witherspoon to have a good performance. However, her limited screen time and lack of a monumental impact on the film will keep her away from an Oscar victory.

Knightley floored me with her acting ability in “The Imitation Game.” She was a strong female character, and played off best actor nominee, Benedict Cumberbatch, very well. Toward the end of the movie, Knightley and Cumberbatch have an unbelievable and emotionally powerful scene together that absolutely blew me away. I thought she absolutely deserved the Oscar until I saw “Boyhood.” Sorry Keira…you’re out.

Although I didn’t care for “Boyhood,” I respect the performance of Arquette. There is one thing that had to hold the movie together for 12 years and that person was Arquette. The ultimately boring film had life when she was on screen. When she wasn’t, I simply yawned until her character reappeared. I felt the same way about Ethan Hawke, but Arquette was far more important to the film. Congratulations Patricia…the Oscar for Best Supporting Actress goes to you.