Weekend Wrap Up: Chainsaws Ring in the New Year

Posted on January 6, 2013 by TheLegendOfRemy

I made a mistake in my last Weekend Wrap Up, erroneously claiming that no new films opened this weekend. That was simply not the case, as there was a new release and it topped the charts no less. So, my apologies. That said, this weekend is yet another example that you should never doubt the power of a well-known, long running horror franchise. 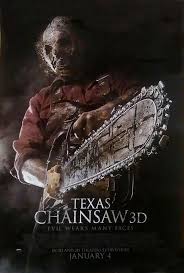 Bringing in the new year, Texas Chainsaw 3D opened to a very strong $23 million. This has actually been a pretty lucrative franchise over the past decade, with 2003’s The Texas Chainsaw Massacre opening to $28 million and The Texas Chainsaw Massacre: The Beginning pulling in $18 million over its opening weekend in 2006. Throw in 3D and seven years of ticket price inflation, and this result isn’t as surprising as I originally thought. Plus, horror fans have been pretty starved for a while now, so in retrospect, the conditions were ripe for this to do well.

Staying steady in second place is Django Unchained. With a drop of just 33% to $20.1 million, this is clearly an audience favorite and should end up as a great swan song if the rumors about Tarantino retiring are true. Django has pulled in $106 million so far and could be headed for the $140 million range by the time it’s all through.

The Hobbit dropped 45%, which is by a decent margin the steepest drop in the top ten. It hasn’t come close to the stamina of the LOTR trilogy. Still, another $17.5 million this weekend raises its sum to a strong $264 million, but getting to $300 million will be very difficult.

Les Miserables looks like it will lose the battle of the Christmas openers to Django, as the latter has held better throughout their runs so far. Nonetheless, Les Mis slid 41% to $16.1 million and passed the $100 million barrier with a total of $104 million. Parental Guidance held well, dropping just 30% to $10.1 million. It now has an inexplicable total of $53 million.

Falling 32%, Jack Reacher grossed $9.3 million. With $65 million in the bank, it’s covered its production budget of $60 million, so add in overseas grosses and it will be just fine. This is 40 also fell 32% and it pulled in $8.6 million. A $54 million total for the Judd Apatow flick is solid, since this budget was only $35 million.

Lincoln posted the best hold in the top ten, sliding just 28% to $5.3 million. Now a whole nine weeks old, it’s truly the elder statesman of the top ten, as no other top ten film is more than four weekends old. Honest Abe has amassed $144 million so far and a lot more could be on the way with a well-timed re-release around Oscar season.

Down 31%, The Guilt Trip pulled in $4.5 million. Its $31 million total is….well, it’s pretty bad. No need to sugarcoat that. And finally, we wrap up the top ten with the expansion of Promised Land, which disappoints with a weak $4.3 million opening, giving it a running total $4.7 million.

Next weekends brings us two new wide releases, though the real story of the weekend might be the expansion of critical darling Zero Dark Thirty.

A Haunted House: Well, it’s about time somebody spoofed Paranormal Activity. I’m just glad it’s being written by Marlon Wayans and not Seltzer and Friedberg (of Epic Movie, Date Movie, Meet the Spartans, and Vampires Suck infamy). As for a gross? Oh, I don’t know…. $11 million?

Zero Dark Thirty: Expanding into wide release after three weekends of very good box office in limited release, what appears to be the best picture front-runner finally becomes available to the average movie-goer. I, for one, thought The Hurt Locker was overrated, but I’m more than willing to give Bigelow another shot. It does have a rapturous 94% at Rotten Tomatoes. I get a bad feeling the film will be too jingoistic for my liking, but hey, I’ll hold off any judgment until I actually see it. With that, I’m out. Until we meet again.